This is a condensed walkthrough of building a skeleton Rust web app using Rocket, Diesel and PostgreSQL heavily based on a more thorough series of blog posts called "Making a simple blog with Rust" and updated to incorporate the recent API changes as well as using a different database schema and a few extra tools.

For a more detailed explanation of each section, please refer to the original blog:

Making a simple blog with Rust - Part I

The code for this project is available on my GitHub.

I wanted to make a very basic skeleton for a prelaunchr type web app with a stripped-down schema called voskhod.

This generated a new binary (application) project as opposed to a library one which you can get by adding a --lib flag to the above command. The difference is in the template used for the directory structure.

This is my initial directory structure:

I've been using cargo-edit to streamline adding dependencies. It provides a cargo add subcommand which, when no version is specified, will try to query the latest version's number from crates.io and then add that package to Cargo.toml.

Here's the command I used to add the dependencies needed:

Note that I had to edit some of the dependencies to enable certain features.

This is what my Cargo.toml looked like after adding those edits, note that I did not need to add diesel_codegen:

I needed to adjust the directory structure to prevent cargo build from failing, here's what it looked like:

Then I created a .env file with a DATABASE_URL environment variable in it in the root of the project for diesel_cli to be able to connect to it.

Then I ran diesel setup to create a database for this project. It is possible that you'd encounter errors at this stage, most likely they'll be related to configuring your postgres users and roles.

Here's the output of that command:

The blog post I am basing this on is describing how to create a blog with users and posts. But in my case, I was going for a slightly simpler schema based on this. I created the initial migration by running the following:

And the output of that command was:

I edited both of those migration files:

diesel migration list showed me that the migration was complete:

I started with a basic "Hello, World!" Rocket setup:

That involved changing src/bin/main.rs to match the following:

I created an index route and mounted the route at the / path. Rocket guide has a lot more information on the inner workings of the framework and I'll be referring to it later on.

I used cargo run and opened localhost:8000 in my browser to see the "Hello, World!" text.

Next, I needed to configure a base Tera layout.

I created a template directory and a base layout file like so:

Then I edited the template file to look like this:

Then it was time to hook up the template to the Rocket app by using fairings and tera::Context.

Navigating to localhost:8000 now should show the new message and use the base template.

infer_schema! doesn't seem to be needed anymore so my src/schema.rs looks like this:

which was generated by diesel when I ran the migrations. You can also generate a table! macro for each of your tables manually by running diesel print-schema, which connects to your DB and gets all the information needed.

Next, I needed to add the actual models. When it comes to diesel, you need to have multiple models for the same table, based on whether you're querying that information or inserting it in the database.

First I ran cargo add chrono because I am using chrono::NaiveDateTime for the timestamps, I also needed to add chrono to the list of features for diesel in Cargo.toml as mentioned here and after that I added the following code to src/models.rs:

As you can see there are two structs: User and NewUser. The first struct derives the Queryable trait which indicates that this record can be queried from the database. NewUser derives the Insertable trait which, as the name suggests, represents that a structure can be used to insert a new row into the database which is specified in the #[table_name="users"] clause.

I needed to update the src/lib.rs module to include our schema and models:

Trying to cargo build then resulted in the following error:

This can be fixed by enabling macros for diesel in src/lib.rs like so:

This made the build succeed, however, there were lots of warnings like these:

This GitHub issue explains why these warnings appear and mentions that it's possible to mute them on a per-module basis by using the following:

I've added it to both src/models.rs and src/schema.rs which made the warnings disappear.

This was fairly straightforward, the way to setup your DB connection is described in detail in Rocket's guide.

It is almost the same as in the "Making a simple blog with Rust", with the exception of adjusting for a change in r2d2 API, namely the removal of Config.

First I created src/bin/seed.rs, then I edited Cargo.toml to include it as an extra binary:

Trying to cargo build now will fail since there is no main function in src/bin/seed.rs.

At this point I also added the fake crate for generating the seed data:

Since my schema is a bit different than the original blog post's one, I also added the following code based on this snippet to src/lib.rs to generate a referral code:

Here's what I added to src/bin/seed.rs to seed the DB with my schema:

After that, running cargo run --bin seed seeded the database, which I was able to confirm by running psql voskhod and then SELECT * FROM users;.

I needed to add the information about the users to the template context. Here's how I changed src/bin/main.rs:

And, similar to the original posts, I also needed to make sure the models can be serialized by first changing the chrono entry in Cargo.toml:

then adding this to src/lib.rs:

And finally I edited the base template to display each user's email and referral code: 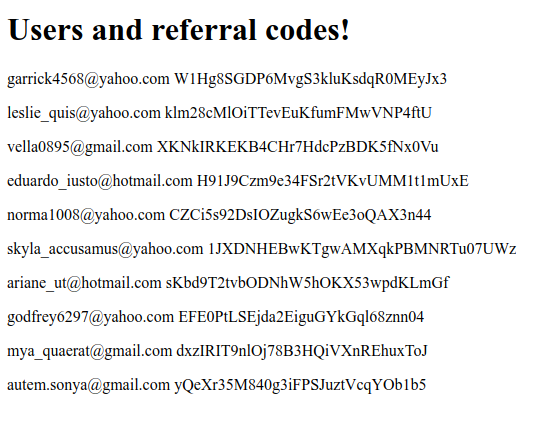 After all that is done, you are left with a basic web app skeleton that you can expand on. I am somewhat curious about what this setup would look like with Actix so I am planning on exploring that next.